As we prepare for a general election and a new Parliament, last week JUSTICE brought together representatives of the three main sitting parties in the last to discuss their record on the justice system and their manifesto commitments for 2015 and beyond. Lord Faulks QC (Conservative), Simon Hughes (Liberal Democrat) and Andy Slaughter (Labour) joined us for a lively discussion, chaired by Afua Hirsch, Social Affairs Editor, Sky News. 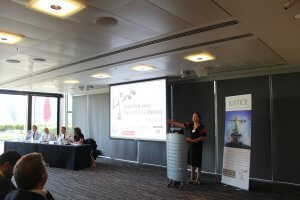 udicial review and ‘secret evidence’ the work of this Parliament has had a significant impact on the complexion of our justice system and on our civil, criminal and administrative law. Commitments for 2015 are likely to range from new surveillance legislation and further counter-terror measures to new rights for victims and repeal of the Human Rights Act 1998.    Against this background, this debate was a timely opportunity for the legal community to come together and discuss justice system priorities for the next Government. The evening was supported by The Bar Council, The Chartered Institute of Legal Executives and The Law Society; and by the Society of Conservative Lawyers, the Society of Labour Lawyers and the Liberal Democrat Lawyers Association.

The debate was in two parts; focusing first on commitments to justice, and second on protecting human rights in the UK. The discussion in both parts was enlightening and the atmosphere lively but civilised. The topics covered ranged from access to justice for victims of domestic violence and trafficking to the scope of a new regulatory framework for surveillance and the internet. However, at the heart of the discussion were key statements on the parties’ positions on legal aid and court costs, and on the Human Rights Act 1998 and our commitment to the European Convention on Human Rights.  Key moments include:

It is not possible to cover the breadth of topics covered in the evening in this short article but you can watch the debate in full for yourself.

For live commentary from the event see #JUSTICEdebate15 on Twitter.

Read a write-up of the event by the thejusticegap

JUSTICE will launch its next report, Delivering Justice in an Age of Austerity on 23 April 2015.

For further information on JUSTICE’s position on the future of human rights protection in the UK, and our defence of the Human Rights Act 1998, see here.

This event was kindly hosted by Allen & Overy.