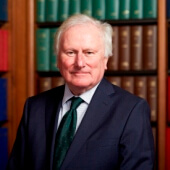 Well it was – for me – an interesting, if somewhat unexpected, path. At school, I didn’t excel at scientific subjects. I enjoyed them but I was more drawn to humanities – history and languages, in particular. In those long past years, the career options for humanities students seemed to be either teaching or law. My mother was a teacher and she was not enthusiastic about my following in her footsteps. So I fell into law by default. However, it was a happy accident as it turned out to be something that I enjoyed enormously, not especially as an undergraduate but certainly when I started to practise law. I was fortunate to have, in modest measure, whatever indefinable combination of aptitudes is required to be successful as a lawyer. It was an entire coincidence that I ended up in law, but a great one.

Did you grow up around lawyers?

My father had qualified as a solicitor but he had never practised, and so I had really no contact with working lawyers. I remember when I spoke to my careers master at school and said I wanted to read law. Although not exactly discouraging, he was unenthusiastic as it was perceived at that time that you really needed contacts as a lawyer. My experience was that, although a network of contacts might be an advantage initially, it wasn’t an essential prerequisite. Certainly, I went through law school without any particular contacts at all.

When I was called to the bar, my only contacts were my contemporaries who had become solicitors. I depended very heavily at the beginning on colleagues passing me briefs and by taking every opportunity when it came. Some of my contemporaries at the bar, who relied on their contacts, appeared very successful initially. However, happily in those days, if you applied yourself diligently and had the aptitude for the work then it was possible to overtake them.

My message to JUSTICE’s student membership is: don’t be deflected by the fact that you may not have contacts in the law. That’s not by any means essential.

Both my sons happen to be barristers and my son in London has said to me “for goodness sake, don’t speak to anyone about me. That would be counterproductive.” So they have forged ahead without any assistance from me or any particular contacts in the law, apart from having had the opportunity to observe my career.

You went to the bench in Northern Ireland when you were only 44 years old. Had you always wanted to be a judge?

A wonderful question- certainly not. I always said that I would never be a judge. I enjoyed my life at the bar far too much. The wonderful thing about being at the bar in my time, especially in Northern Ireland, was that every day provided one with a different opportunity and a different experience. Sometimes those weren’t as pleasant as they might be, but on the whole I loved my career. The experience of feeling that you had done the case as well as you possibly could have done, whatever the outcome, the adrenaline rush you got from that is not easily replicated in one’s life as a judge. My practice required an enormous amount of work and it made many demands on me and my family, but it was a wonderful time.

I certainly had never any particular aspiration to become a judge. The business of promoting a case as well as you could is very different from adjudicating upon its merits. In those days, there was never any question of applying to become a judge. What happened was that the Lord Chief Justice of the day phoned me up and said that he and the Lord Chancellor thought it may be a good idea for me to become a High Court Judge. The difficulty is that as a barrister your professional life really involves you taking every opportunity as it comes and I felt that I had to seize this opportunity too. But, I was faced with something of a dilemma- did I go on doing a job that I adored or did I pass up on this opportunity to experience a completely different way of doing it?

Without being too sententious about it, the other motivating factor was a sense of duty. The law had been terribly good to me and I felt that it was incumbent on me to pay back, somehow, by becoming a judge. There were many disadvantages, especially in Northern Ireland, in becoming a judge at that time. However, I felt that it that was the right thing to do and that was a very good reason to do it.

As a judge, you’ve given judgment in a great number of important human rights cases. Why are they important to you? Anything to do with growing up in Northern Ireland?

Interesting, I haven’t really asked myself that question- perhaps I ought to. In Northern Ireland, because of the experience we had during the times that are now described as The Troubles, we had more occasion, I suppose, to test the boundaries of the law when it came to human rights issues. We had plenty of opportunity to explore how far human rights should extend in order to protect the freedoms of persons in a society that was in a state of pressure, if not emergency.

Of course, in my particular case, I was usually on the side of the government but that didn’t mean that I was not alive to the need to protect the freedoms of the individual or to the merits of the case that was being made against the government. I had plenty of experience on that account.

As a judge, one is alive to the responsibility that we have to make sure that possible excesses on the part of government are at least subject to proper scrutiny and I’m very conscious of that in my current job. When individual freedoms are at stake, I do have a very acute responsibility to be conscious of the right of an individual when it’s confronted by executive power.

How has the human rights world changed since you started out in your career?

It’s changed enormously since the enactment of the Human Rights Act. The central point about the Act is that it has given judges free access to the rich vein of jurisprudence that is provided by the Strasbourg Court. I am much in favour of the view that Strasbourg should not necessarily provide the last word on the content of human rights in our jurisdiction. I think it is a very healthy thing for the judges in our jurisdiction to be prepared not to follow slavishly all the utterings of the European Court of Human Rights. That said, we now have the ability to draw on jurisprudence from all over the Council of Europe on matters that critically affect the balance of power between the citizen and the state and I think that that can only be a good thing.

We occupied something of a surreal world before the enactment of the Human Rights Act. Since 1966 there was the right of an individual petition to Strasbourg, but that could only be used when domestic remedies were exhausted. The problem was that domestic remedies were pursued in a scenario where it was not open to the domestic courts to have regard to Convention jurisprudence. It was said, in cases such as Brind, that we could not introduce the Convention by the back door. So we had this self-denying ordinance whereby we couldn’t refer to Convention rights at home, but the case would then go to Strasbourg where it would be decided on a supranational plane. So, insofar as Convention rights were concerned, we didn’t have any input into the decision making. The disadvantages of that seemed to me to be obvious. First of all, if we are a fully fledged member of the Council of Europe, I think national courts should be adjudicating on Convention Rights. But secondly, and possibly more importantly, if the matter goes to Strasbourg, they would surely want to have the input of the national courts as to the standards and values that are maintained in the United Kingdom and which should inform the content of that particular human right.

What do you think is the greatest opportunity for human rights law in the UK today?

There are so many areas where human rights challenges are relevant. It is very difficult to calibrate which are the more important. It is easy to say, at a high level of abstraction, that freedom of the individual is something that needs to be cherished and prized. I think something that most people in the UK would regard as a terribly important aspiration.

Professionally, Lord Bingham, Lord Steyn and, a predecessor of mine, Lord Lowry, who was a wonderful Lord Chief Justice of Northern Ireland.

Personally, my Grandmother who, although largely uneducated, was probably the most intelligent, and certainly the wisest, woman I ever knew and who remains an inspiration to me today.

As a national network, we have a lot of non-Oxbridge student members, as one of the only two Supreme Court Judges educated outside Oxbridge, do you have a top tip for these students?

I finished A-levels at a fairly young age and I did express an interest in going to Oxford. I had a wonderful education but my school felt that that was a slightly ridiculous aspiration so I was never entered for the Oxford exam. My mother, who was a wonderful woman, was the widowed mother of seven children and although she was enormously ambitious for her children’s education, it would have been a step that she would have regarded as too far. So I never applied. I went up to Queens University slightly disappointed but it was unquestionably the right thing for me.

The law faculty in Queens at the time I entered was brilliant with magnificent teachers, a magnificent training ground for my subsequent career. Of course, there was the other happy circumstance that I met my wife there! So, I was pleased in retrospect that the chance to apply for Oxford didn’t arise.

I don’t see it as a disadvantage; on the contrary, I see it as an advantage. I would encourage young people who are not Oxbridge graduates not to set their sights low. There is every chance that graduates from other universities will do just as well as Oxbridge graduates. It’s, if you like, a mark of distinction of which I am proud.

Some of the members of the JSHRN will be thinking about joining JUSTICE as full members. You’re a keen supporter and Patron of the JUSTICE Appeal – why do you support JUSTICE?

Well why would I not? JUSTICE provides an enormously important contribution to the development of law; it’s frequently an intervener in cases and it brings a completely different dimension to many of the supremely important arguments that are presented to the Supreme Court. It’s a wonderful organisation and it’s a mark of maturity and of the civilized standards of our society that we have organisations such as JUSTICE; that there are people who are prepared to contribute to the debate as to how we develop as a society and how the law should respond to what are perceived to be contemporary values and standards. As lawyers and judges, we need people who are in touch with the problems and difficulties that ordinary members of society experience so that we can develop the law in response to those needs and requirements. I can’t conceive of any arguments why young lawyers shouldn’t want to be supportive of JUSTICE; if not active members of it.