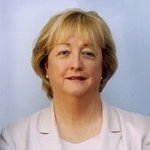 Please tell us about your best day at work?

My job is so diverse, it is incredibly interesting. One of the best days at work was the day I signed the peace agreement in Northern Ireland. It made a fundamental difference to the country but it is also made a huge difference to my own life. Since then I’ve been involved in other conflict situations. One of my most recent best days was where I did a workshop with Syrian women in Geneva before they were about to enter the peace talks. They were incredibly courageous, resilient women, and we had fantastic days working together.  I came back with my batteries recharged. After everything the women had been through they were still hopeful, as women. They were still able to go into these talks and help in whatever way they can to resolve the conflict.

What do you think is the greatest challenge for women looking to access justice in the UK?

Some of the misogynist attitudes of men towards women count as one of the biggest challenges. We can change policies and we can change laws. However, the actual change in relation to the culture, despite the fact everyone thinks we’re living in a very progressive democracy, remains a huge challenge. The work that I’m doing at the moment, interviewing women who have experienced domestic violence, will show you the extent of the emotional violence against them, in terms of coercive and controlling behaviour, but also the extent of sexual violence against them – and these are the men known to women, they’re not the strangers in the bush. So, for me, attitudes need to be changed. It needs to stop being acceptable, in terms of our culture, either in telling jokes or pretending that this isn’t a serious issue. It’s an incredibly serious issue and it does a lot of damage. It is unfinished business and we really do need a fundamental shift in terms of attitudes to prevent hundreds of women’s lives in this country being damaged and as well as hundreds of women being murdered.

How far do you think the UK has come towards gender parity in the legal profession?

I think it is doing better in England and Wales, and certainly in Scotland, than in Northern Ireland. We have only recently, in the past few months, appointed our first two female High Court judges since 1922. So there is still an issue in terms of the number of women in the senior ranks of the judiciary. What’s more, most of the women I’m interviewing would still say that the expectation is that they would become experts in family law and leave criminal law and other parts of the law, say to do with finance, to the men. So not only is it not there in terms of numbers, but in terms of the substance that women are expected to deal with. I think there is still a very big issue in terms of lack of parity.

I was incredibly inspired by President Mandela because I actually met him and we spent three days with him during our peace talks in South Africa.  Truly this man has walked the walk and he’s just so funny and good company and charismatic and had the most powerful leadership of anybody I’ve ever seen. In terms of women who inspire me most, they would be women I know who work quietly behind the scenes, who never look for recognition and who do the most powerful work in terms of back channeling – where people are in conflict, where communities are in conflict. I see it all the time. There’s not just one of them, luckily for us there are many, and they’re my heroes. As well as the midwives who helped me bring my two sons into the world.

What have you discovered during your career which you would have benefited from knowing as a student?

Believing in yourself. Having a mentor, someone who is able to say: “here are the really good gifts that you have got, let’s work on these, let’s develop these”. Also having the confidence to be able to speak publicly and to engage with the media is important. I still think there are too few women commentators on the political scene, and looking back it took me some time to get accustomed to that role, but I am very glad that I eventually became comfortable with it. This came with training, expertise, capacity building, and indeed encouragement – it just doesn’t fall out of the sky.

Join us on 19 March 2016 for our Annual Student Conference to hear Andrea Coomber, Director of JUSTICE, in conversation with Shami Chakrabarti, Director of Liberty. Sign up now.