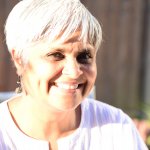 Pragna Patel is a founding member of the Southall Black Sisters (SBS) and Women Against Fundamentalism. She worked as a co-ordinator and senior case worker for SBS from 1982 to 1993, when she left to train and practice as a solicitor. In 2009 she returned to SBS as its Director. She has been centrally involved in some of SBS’ most important cases and campaigns around domestic violence, immigration and religious fundamentalism. She has also written extensively on race, gender and religion.

Please tell us about your best day at work?

There are many. But I suppose it has to be in 1992 when I along with other SBS members walked besides Kiranjit Ahluwalia, an Asian mother of two, as she came out of prison after a long two year campaign waged by SBS for her freedom. It was an exhilarating moment! Kiranjit had suffered 10 years of domestic violence and had been unable to exit due to fear, the stranglehold of her religion and culture and her lack of awareness of her rights and the absence of alternative support systems. Eventually in desperation she killed her abusive husband but found herself convicted of murder and sentenced to life in prison. We had no idea when we took up her case, that it would become a national rallying cry against violence against women. The case highlighted the ways in which abused women are treated in the criminal justice system and denied access to justice.

The case highlighted how the then criminal law – especially the laws of self defence and provocation in relation to murder were inherently biased against women. They were historically constructed around male norms of behaviour and did not take account of the contexts of domestic violence in which most women kill. The result was that women did not have equal access to the same defences as men who killed, usually as a result of a history of perpetrating domestic violence. The case also highlighted how culture and religion are powerful additional constraints that make it difficult for black and minority women to exit from violent and abusive relationships.

Our campaign had a two fold aim: To secure the release of Kiranjit and to highlight the failure of the law to take account of the social realities of women like her so that they are not denied justice. We succeeded in both and some years later, in 2009, the problematic defence of provocation was itself abolished on the grounds that it was no longer relevant in a society in which knowledge and awareness of the reality of domestic violence was growing.

It was a great and hugely satisfying day that showed us just what can be achieved when we combine law with activism because it was the campaigns in particular that galvanised widespread support for the case and forced the Court of Appeal to think differently about violence against women.

What do you think is the greatest challenge for women looking to access justice in the UK?

Where do I start? There are a great many challenges but the most immediate and urgent challenge I think has to be the erosion of legal aid.

The so called ‘reforms’ on legal aid are hindering our efforts to protect and safeguard the human rights of some of the most vulnerable and disempowered women that we see. It is therefore particularly ironic that at a time when there is growing awareness of gender-based violence, the state is choosing to withhold the very tools that we need (legal aid, the Human Rights Act to name just two) to assert  fundamental rights and freedoms that the state itself claims are the defining characteristics of so called ‘British’ values.

Savage cuts to legal aid by successive governments have seen the removal of legal aid from a huge range of civil and criminal matters. These cuts impact not only on individual rights but also on our very ability to hold institutions to account for abuses of power that seem to be growing rather than diminishing.

We have seen a great victory recently as a result of the legal challenge brought by Rights of Women to ensure that victims of domestic violence have access to legal aid. But this victory won’t help all women who face violence because there are  many other aspects of the legal aid cuts, like the residence test, which when coupled with cuts to essential support specialised services, have a disproportionate impact on BME women in particular.

BME women’s ability to access to justice is also being eroded by religion which is stepping into the vacuum created by the state’s retreat from its promise to deliver justice. Religion as the arbitrator of justice is especially gaining ground in minority communities through religious arbitration systems that inherently discriminate against women and other vulnerable sub groups. It is an increasingly authoritarian or fundamentalist form of religion often masquerading as ‘moderate’ that is now dominant in the various minority communities. This spells utter disaster for women’s rights. We therefore have to be constantly vigilant.

Looking back on your career, how far do you think the UK has come towards gender parity in the legal profession?

Not being in the legal profession, I am not best placed to answer this but from what I can see, women still have a long way to go in achieving gender parity in the legal profession. I note that there is still only one woman in the Supreme Court and that women in the upper echelons of the legal profession continue to be under represented. I understand that the gender wage gap has grown and there is still widespread sexism. At the highest levels of the courts, for instance, we see that those from white, male and public school educated backgrounds still dominate.  It is tragic that women’s talents are so laid to waste in this day and age.

But this is symptomatic of a much wider structural problem of gender inequality and other forms of discrimination in society as a whole.

I don’t think there is any one source. When I was about 14 years of age, I was greatly inspired by Mahatma Gandhi. I faced a lot of racism in school, (mainly in the playground but also indirectly from the staff.) I was desperately looking for role models – people from my own background – because I wanted to be confident and proud in my own skin. I was aware of Mahatma Gandhi (my father and other male relatives often got together and talked critically about his leadership in the Indian Independence movement). But I didn’t know a lot about his work and his world view. I discovered books on Gandhi in the school library and became fascinated with the man and his struggles and so read everything about him. It helped me enormously in shaping my ideas and world view but more than anything else, it gave me self esteem and inspired me to resist racism and all forms of oppression rather than submit to it.

When I was about 16, I was hugely inspired by James Joyce’s novel: A Portrait of the Artist as a Young Man. It was a significant moment in my personal life when I was faced with a forced marriage. The constant refrain in the book ‘I will not submit’ and the lines: ‘You talk to me of nationality, language and religion I shall try to fly by those nets’ have become my guiding mantra. It has helped to shape my feminist, anti-racist, secular and anti- fundamentalist world view.

I have also been inspired by the many black activists of the 70s in the UK, especially black women. More than anything else, they taught me never to be afraid and to resist oppression wherever it exists. Together with others, I was able to use the space they created to imagine and develop a progressive politics that calls for solidarity and the need to struggle against racism and other forms of oppression based on class and patriarchy for instance at one and the same time. We cannot give into the idea that there is such a thing as a hierarchy of oppression.

When I set up the Southall Black Sisters centre, I was inspired by the Law Centre movement. It is so depressing to see that in this age of austerity so many are shutting down. Those who work in them are the unsung heroes of the movement for access to justice. We should never forget the debt that we owe them.

Finally, I have been inspired by the courage shown by the women that we have the privilege to work with; women who suffer unbelievable horrors but who remain dignified and strong. They teach us a thing or two about the true meaning of courage, fearlessness and compassion.

What have you discovered during your career which you would have benefitted from knowing as a student?

That much of what we do is in our daily work is about hard graft and commitment. Cases like that of Kiranjit Ahluwalia don’t come around that often. We can’t be blinded by some glamorous idea of human rights work. It is important to understand that the every day, often mundane casework that we do is human rights work. Those who carry out, often without any recognition, such unglamorous but much needed work deserve to be recognised and given respect as human rights defenders.

Join us on 19 March 2016 for our Annual Student Conference to hear Andrea Coomber, Director of JUSTICE, in conversation with Shami Chakrabarti, Director of Liberty. Sign up now.