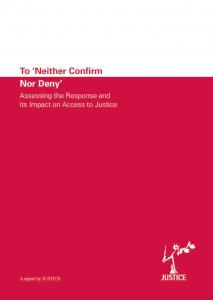 In February 2018, JUSTICE launched a new report on the ‘neither confirm nor deny’ (NCND) response at Matrix Chambers. The NCND response is most often used by public authorities in the national security and law enforcement contexts to avoid revealing sensitive information. It may, for example, be used in response to requests for information on undercover operations or in relation to surveillance programmes. However, in some circumstances, NCND has been used by public authorities to avoid disclosing information that may reveal unlawful activity. For instance, the police repeatedly used NCND in response to allegations of undercover police officers maintaining long-term, intimate relationships with environmental activists. Currently, NCND is being used in relation to the government’s alleged mass surveillance programmes revealed by US whistle-blower Edward Snowden.

The report focuses on civil courts and the Investigatory Powers Tribunal and includes some discussion of the Undercover Policing Inquiry. Our research drew on discussions at a roundtable in March 2017 at UCL, a roundtable at Oxford University in November 2017, and previous JUSTICE work, to analyse the access to justice and procedural fairness issues raised by NCND. The report argues that although there are legitimate circumstances where the response can be invoked, it should not be applied in a blanket fashion. Overuse of NCND unduly limits a claimant’s ability to plead their case and threatens open justice.

We make 23 recommendations for reform, across five themes:

If you have further inquiries about the report, please contact our Legal Director Jodie Blackstock.

JUSTICE’s work was supported by Oxford Pro Bono Publico (OPBP), an organisation based at the Oxford University Faculty of Law, who conducted comparative research on the use of NCND in various jurisdictions.