Ellen originally studied English literature at the University of Cambridge. Whilst studying for the bar she was awarded the Hubert Monroe Award, the Baron Dr Ver Heyden de Lancey prize and the Certificate of Honour from Middle Temple and was called in 2014. She completed pupillage and thereafter practised as a tenant on the North Eastern Circuit, where her practice was predominantly in family law but also included civil, administrative and criminal law. Between practising as a barrister and joining JUSTICE, Ellen graduated top of her class in Transnational Legal Studies LLM at Vrije Universiteit Amsterdam, during which time she also worked as a research assistant to the university’s Transnational Law department. Her thesis was on the EU’s Operation Sophia and its support of the Libyan Coast Guard, analysing the legal accountability mechanisms available to challenge the EU for human rights violations suffered by migrants in the Mediterranean. Ellen has been published by the EU Immigration and Asylum Law and Policy blog and previously worked as an associate lecturer at Northumbria University. 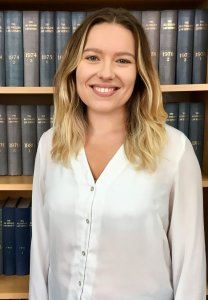