Adam specialises in public law, human rights and general civil law. He has been appointed to the Attorney General’s preferred panel of barristers and is the founding editor of the acclaimed UK Human Rights Blog. Before being called to the Bar in 2007, Adam graduated from Oxford University with a first class degree in Politics, Philosophy and Economics, and received an MA in Political Science from Columbia University.

Did you always plan to be a lawyer?

No, I never planned to be a lawyer! I hadn’t even considered it until I did my Masters degree in political science, at which point it started to come onto my horizon as a possibility.

How did you get involved in human rights law?

It was the area which I was most interested in and really the reason I became a lawyer.

What role does human rights law play in your work?

A very significant one. Most of my work is public law/public inquiries and human rights play a central role in many of the cases I am involved in. I also set up and edit the UK Human Rights Blog, which publishes case summaries and commentary on human rights debates – this takes up a significant amount of my time.

Unfortunately, the field is contracting at the moment because of funding changes, for example legal aid has been withdrawn from many kinds of human rights claims. If you are set on a career in human rights, try to get work experience in different areas: solicitors’ firms, barristers’ chambers, NGOs, government… keep your options open!

What do you think is the greatest challenge – or opportunity – for human rights law in the UK?

The greatest challenge is the Conservative Party’s plans to replace the Human Rights Act with a Bill of Rights. The plans as they currently stand pose real challenges for the international human rights system and may well lead to the UK leaving the European Convention on Human Rights. That would be a bad thing.

The UK Human Rights Blog is extremely popular, how did you kick-start it?

It took a lot of work, but almost no money. I designed the site myself and basically just started writing it and emailing people to tell them about it. After a few months it started to take off and after a year it was already quite well established. It has had almost four million hits in less than five years and has tens of thousands of subscribers. I am really proud of it and delighted that so many students regularly read it! 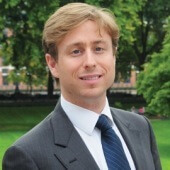