James Wolffe is recognized as one of the leading silks at the Scottish bar with extensive experience of both commercial and public law. He was called to the Scottish bar in 1992 and took silk in 2007. In 2014 he was elected Dean of the Faculty of Advocates. He was First Standing Junior Counsel to the Scottish Ministers from 2002 to 2007, and served as an Advocate Depute from 2007 to 2010. James was called to the bar of England & Wales in 2013 and is a door tenant at Brick Court Chambers, London.

I grew up in rural south west Scotland and was educated at the local school before studying law at Edinburgh and Oxford Universities. I trained as a solicitor in one of the large commercial firms in Edinburgh.

Shortly after qualifying, I was on holiday on the island of Skye and saw a newspaper advert for a new position, Legal Assistant to the Lord President of the Court of Session. The Lord President at the time was Lord Hope. The job looked interesting, I applied and was selected. That took me into Parliament House in Edinburgh, where the Supreme Courts of Scotland are based. After I finished my year in the Lord President¹s office, I qualified as an advocate, and have been lucky enough to spend most of the rest of my career since in and about Parliament House – with occasional forays to other parts of Scotland and to London. One of the best career decisions I made was to become a full-time prosecutor – something I did for three years after ten years practising principally in commercial and public law. This stretched me professionally – and challenged me on a personal level as well.

What do you think is the biggest challenge for practitioner in Scotland at the moment?

The challenges depend on the area of practice. The period since devolution in Scotland has been an extraordinarily interesting one for any lawyer interested in public law and human rights – but Scotland still has a less well–developed culture of public interest litigation than England & Wales. Partly this is simply a question of scale, but there may be other factors – for reasons which are unclear, the incidence of litigation across the board is very significantly lower in Scotland than in England & Wales – as well as funding issues.  A less litigious culture is not necessarily a bad thing – but it may be that the phenomenon, in part, reflects a level of unmet legal need or unremedied injustice in Scotland. While this may present a challenge for the lawyer who wants to practice in this field, it also, perhaps, means that there is scope to make a difference.

Do you have a top-tip for students working towards practice in Scotland?

Be open-minded and flexible. People don’t always end up in the law where they expected. Also – keep your idealism.

Some of the members of the Student Human Rights Network will be thinking about joining up as full JUSTICE members. Why did you join JUSTICE?

JUSTICE plays a unique role – as a civil society organisation committed to providing authoritative and independent comment on justice issues. It seemed to me that the establishment of JUSTICE Scotland was an important event which had the potential to contribute to the quality of public debate in Scotland – and I wanted to support that initiative.

If you visit the remnant of the great Oranienbergerstrasse Synagogue in Berlin you will see two beautiful velvet Torah curtains. Those curtains – which were donated to the Synagogue by my great-great-grandfather – miraculously survived Kristallnacht and the Second World War. They bear an inscription from the Psalms: “Justice and righteousness are the foundation of your throne”. The juxtaposition of that text in the ruins of the Synagogue, and the history which they represent, reminds me of the importance – and fragility – of the rule of law, and that we need to be vigilant in the protection of fundamental rights. 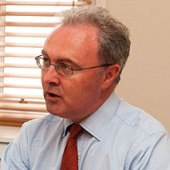